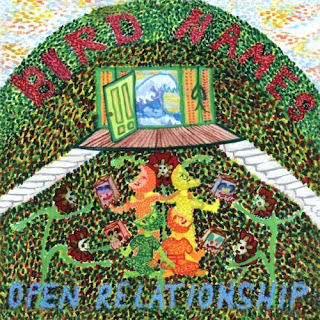 A band like Bird Names only shows up on the radar a couple times a year, if that, so it is important that I catch my breath and fan myself before I start so as not to get too wildly out of control. By checking the release date, you’ll notice that this album has avoided me for the better part of year. That is probably for the best because if I would have got this in April I may not have listened to much else throughout the year. Hailing from the musically affluent city of Chicago, it’s a wonder that more dust hasn’t been kicked up over Open Relationship. The album is a colorful blend of art-damaged folk pop that never loses its charm amidst its brash juvenility. It’s jagged and playful, inventive and hook-laden and overall happily odd. Open Relationship’s fifteen tracks are packaged like bite-sized candy bars and then deep fried just for fun; each is a super rich exciting blast of fricasseed creativity. The great part about Bird Names is that they aren't content to simply rehash the same song fifteen times. Though they rarely stray from the two to three minute time frame, the band still manages to wrangle in touchstones that read like noise pop pedigree chart. From Pumice to Ariel Pink to Times New Viking to Animal Collective, Bird Names encompasses the best of each and more, creating a one-stop shop for all things awesome. Open Relationship is the kind of introduction that will have you scrambling to snatch up the back-catalog; sooo grood.