Candy Claws - In the Dream of the Sea Life 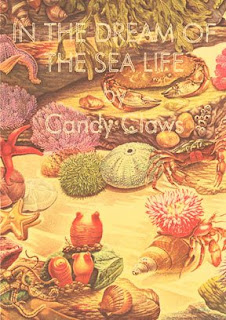 Hurry! Before it’s too late! I’m sorry! Hurry! Forgive me! I’m sorry! This was supposed to be IT! This is IT, it’s your perfect summer album, and it’s all my fault that it isn’t. I’ve been meaning to write this review since before the schools got out, since before the swimming pools and snowcone shacks opened their doors and peddled their respective forms of refreshment. Could it be, that this is the one that got away?
But no, I say. And this album, too—No! it says:

1. Depending on your situation (globally, educationally, economically, emotionally, etc., etc.), there is still give-or-take a month left of summer. Or should I say, almost ONE WHOLE THIRD of your summer left to enjoy! Swim! Drink iced tea, splash in a fire hydrants’ fountaining! Relax—just try it! Read! Work hard, play harder! Kick the can! Stay up late! And let this album be your soundtrack. It is just ideal. It has been, after all, created as a “companion album” to Rachel Carson’s The Sea Around Us; an album created with the ocean—all its light, its vibrancy; its activity, its cool; its immensity and wonder and playfulness—as the music’s dragoman, its inspiration and influence. And what is so, so much more important, Candy Claws manage to pull it off. This is an unbelievably ambitious record, and the fact that it doesn’t just crush under the pressure of its themes is incredible. (Serious: I can’t believe it’s coming from this “…who?” troupe, there’s so much aplomb and talent and objective-fulfilling. They sound like serious vets. I mean, to legitimately remind me of the Flaming Lips, without sounding like a rip-off or half-bake?) Truly, the weight of the ocean is bearing down on them, and from that crucible emerges a gem, an effortless, playful album that shows not a single sign of strain, anywhere. Which leads me to

2. (A rebuttal of my opening themes, kind of.) What is great about In the Dream of the Sea Life is that it is good enough to transcend being just another “watery” sounding or “beach” themed summertime album. All of the components of the music are proficiently, potently used, and the band sounds distinct in all the right ways. They really seem comfortable in their own skin, poised and coolheaded as artists, bursting with ideas and the enjoyment of hearing those ideas realized in such a way. Their album has been a completely wonderful surprise, and I can only apologize for keeping it to myself for so long.

[P.S. The hard facts, for those who want them: Candy Claws is a two-piece from Fort Collins, Colorado. Ryan Hover and Kay Bertholf are their names. This is their first LP, and was released by Act So Big Forest—a Fort Collins “collective” of which Hover and Bertholf are members. HOWEVER, they have just recently joined the Dublin, Ireland-based label-thing Indiecater Records. And In the Dream of the Sea Life will be released, “remastered” and with far, far less fantastic artwork than the original, by them on August 3rd. However, since the original sold out months ago, it’ll have to do. And do it will, I’m certain.]

Posted by Forest Gospel at 7:38 AM

Email ThisBlogThis!Share to TwitterShare to FacebookShare to Pinterest
Labels: act so big forest, candy claws, in the dream of the sea life, indiecater

Thanks for a lovely review. Label thingy here to let you know that In The Dream of The Sea Life has rewoken in new clothes (remastered & new artwork) with a fresh new video for Catamaran. Hooray!!

P.S. A CD of the remastered album is due in mid October!

What a great resource!